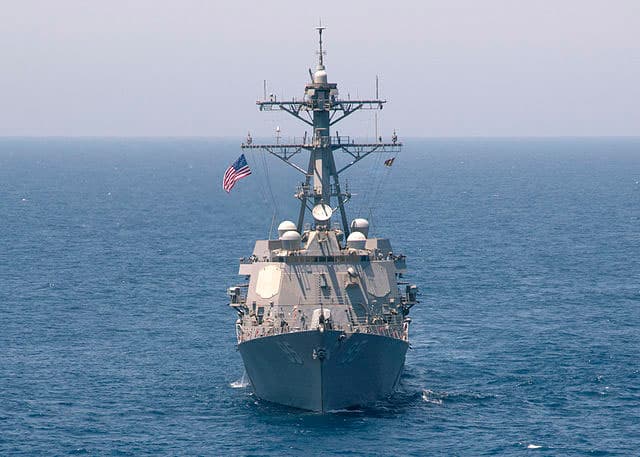 Mobile, Ala. –February 25, 2019. The Navy League of Mobile, the Alabama State Port Authority and GulfQuest Maritime Museum of the Gulf of Mexico will host this year’s Mardi Gras Ships, the USS JAMES E. WILLIAMS (DDG 95) and the USCG CUTTER MANOWAR. The USS JAMES E. WILLIAMS will berth at the Alabama State Port Authority’s Pier 2 Terminal located on Water Street, downtown, Mobile, Ala. The USCG CUTTER MANOWAR will berth at GulfQuest located on South Water Street, downtown Mobile, Ala.

The Navy ship, whose motto is “Lead from the Front”, should begin transiting the Mobile Ship Channel shortly after daybreak the morning of March 1, 2019, with an anticipated arrival at Pier 2 sometime around 11:00 am. CST. Members of the media are invited to cover the Navy ship’s welcoming festivities and should arrive early to photograph/record vessel approach to the dock. The U.S. Navy will host a press forum with the Commanding Officer, the Executive Officer and the Command Chief immediately following the welcoming ceremony. Crew hailing from the region will also be available on the forecastle deck of the ship.

The USCGC MANOWAR is a Marine Protector class of coastal patrol boats of the United States Coast Guard. The 87-foot-long vessels are based on the Stan 2600 design by Damen Group, and built by Bollinger Shipyards of Lockport, Louisiana. Each boat is named after a marine predator. This vessel class, which can reach speeds of 26 knots, carry a mission to combat drug smuggling, illegal immigration, marine fisheries enforcement and search and rescue support. Since the September 11, 2001 attacks, many have a homeland security mission in the form of ports, waterways and coastal security (PWCS) patrols. The Commanding Officer of the MANOWAR is LTJG Julia Mundy. The motto of the U.S. Coast Guard is Semper Paratus, meaning “Always Ready.” 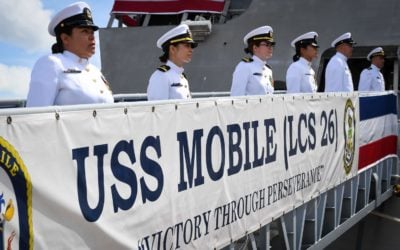 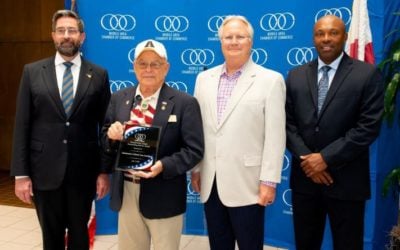 [July 2, 2020] Today, the Mobile Area Chamber and its Military Affairs Committee presented five awards during the broadcast of its 33rd annual Military Appreciation event, and recognized 14 Junior ROTC cadets from area high schools. “As so many of you know, the Mobile... 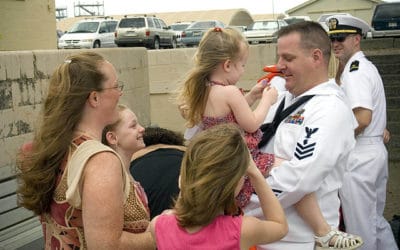 On Oct. 14, the Navy League scholarship application period is opening for the 2020-2021 school year. These scholarships are available to children and grandchildren of veterans or active-duty sea service men and women, as well as members of the U.S. Naval Sea Cadets... 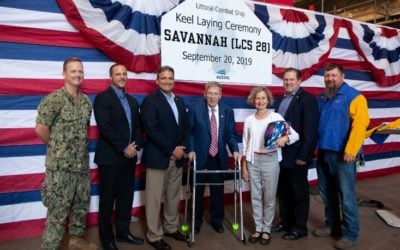 Happy Fall to all of our Mobile Council Navy League Members. 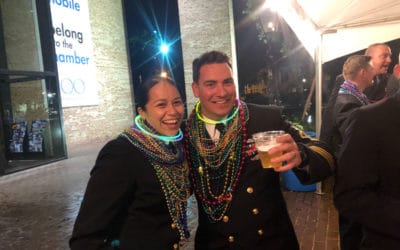 View the photo album of the arrival of the USS JAMES E WILLIAMS and the crew celebrating Mardi Week with the Navy League Mobile.